Arts and social justice always were at the heart of Unity Project’s UPwithART fundraiser.

Now, that connection has been made stronger thanks to a partnership between the local organization that offers shelter and housing services and Museum London.

UPwithArt “has been one of our major events over the last few years in which we have gathered artists, collectors and people who want to support arts and support our cause of alleviating homelessness and poverty,” said Chuck Lazenby, Unity Project’s executive director.

“It has grown tremendously over the last few years… and that exceeds our capacity as a small organization (to manage it), so given we already had a relationship with Museum London, it just made sense for us to combine our efforts.”

As part of the event, now in its ninth edition, Unity Project auctions donated art, with proceeds of the sales going to support the organization’s homelessness relief efforts. These include an emergency shelter and supportive housing programs for people dealing with poverty and homelessness.

This time around, a portion of those proceeds also will go to support public programming at the museum.

For the upcoming auction, more than 75 works of art valued at more than $70,000 have been donated by artists – some of them current or former Unity Project clients – art collectors and other supporters of the project. They range in value between $50 and $2,500.

One of the donating artists is Angie Quick, who is contributing a painting to UPwithArt for the third year. 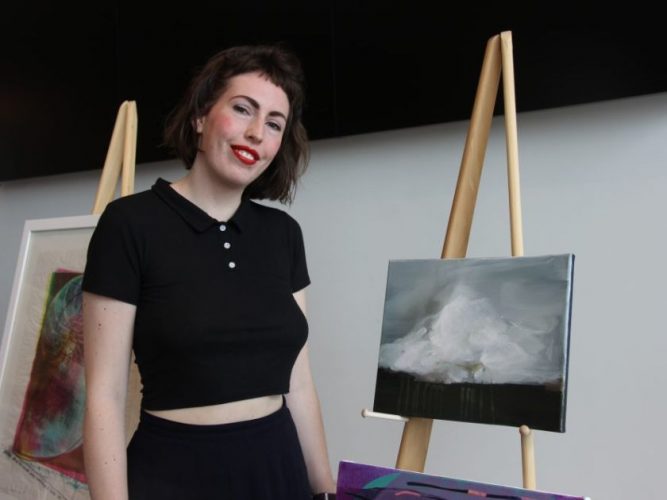 “I think this is a very important event that is very effective at what it does,” she said. “It clearly brings together so many different people within the community, and it focuses on the art, the artists and the people who it’s helping in the community and bridging those things together.”

Besides the art for sale, the event includes door prizes for advanced-ticket holders and raffle items. People can preview the art on the event’s website, www.upwithart.ca, and bid on the items online if they can’t make it to the event.

Thanks to the new partnership, the event will be held this year at the museum’s recently renovated Centre at the Forks area.

Brian Meehan, the museum’s executive director, said these were the types of events they hoped they would be hosting when they decided to embark in the $2.5 million project to renew the space to include a two-storey window-wall and a terrace overlooking the Thames River.

“We really imagined this space as a community gathering place  . . . and we were thrilled to be part of that,” he said, adding he believes the new partnership could help the event grow even more than it already has.

“So this was an opportunity to double the audience for the event and hopefully get that many more people through the door and make it even more of a success than it has been in previous years.”

Be Part of Our Community